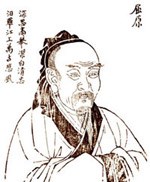 Dragon Boat Racing has ancient Chinese origins and its history has been traced back more than 2000 years. The first participants were superstitious Chinese villagers who celebrated the 5th day of the 5th lunar month of the Chinese calendar. Racing was held to avert misfortune and encourage the rains needed for prosperity - and the object of their worship was the dragon. The dragon of Asia has traditionally been a symbol of water. It is said to rule the rivers and seas and dominate the clouds and rains.

Over the years a second story was integrated to give the festival a dual meaning - the touching saga of Qu Yuan. Legend has it that poet Qu Yuan was banished from the kingdom of Chu after the King fell under the influence of corrupt ministers. Qu Yuan spent many years wandering the countryside and composing great poetry until, on learning of his kingdom's defeat, he leapt into the Mi Lo River holding a great rock in a display of his heartfelt sorrow. The people loved Qu Yuan very much and raced out in their fishing boats to the middle of the river in a vain attempt to save him. They beat on drums and splashed their oars in the water, trying to keep the fish away from his body.

Today Dragon Boat racing involves teams of up to twenty paddlers in a 40 foot boat with a drummer and helm, paddling frantically to beat the other teams down the course. The drums, shouting and colourful boats all make it an impressive and exciting sport both to watch and to compete in.